Your Guide to the Modern Varieties of Cybercriminal 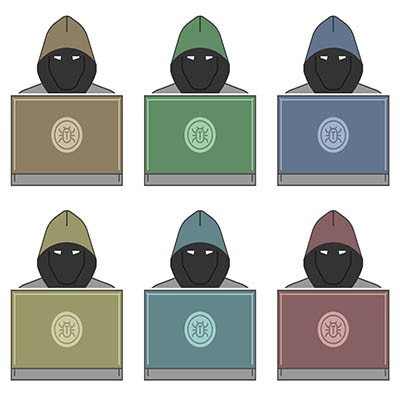 There is an entire litany of stereotypes that are commonly linked to the term “hacker”… too many for us to dig into here, especially since they do little but form a caricature of just one form that today’s cybercriminal can take. Let’s go into the different varieties that are covered nowadays under the blanket term of “hacker,” and the threat that each pose to businesses today.

To give this list some semblance of sensible order, let’s go from the small fish up to the large players, ascending the ladder in terms of threats.

First and foremost, not all hackers are bad. Certified Ethical Hackers are high-profile cybersecurity experts that are designed to think like a cybercriminal. They can be employed to determine how secure your organisation is.

We all make mistakes, and we can all get a little bit curious every now and then. Therefore, it stands to reason that this curiosity could get people into trouble if they were to find something—some mistake in its code or security—on a website. This is by no means uncommon, and the question of whether this kind of hacking should be prosecuted if the perpetrator reports their findings to the company has been raised by many security professionals.

Regardless, if someone can hack into a website without realising what they are doing, what does that say about the security that is supposed to be protecting the website… or, by extension, a business’ network? Whether or not you take legal action, such events should never be glossed over and instead be addressed as growth opportunities for improving your security.

Each of the hackers we’ll cover here has their own motivation for hacking into a network. In this case, that motivation ties directly back to bragging rights (even if the hacker only ever brags about it to themselves). While these hackers were once far more common, the heightened accountability and legal consequences that such behaviors now bring have largely quashed the interest in such hacking. Many of those that would have once been interested in this kind of hacking are now focused on modifying hardware over software, turning to interest-based kits like the Raspberry Pi and others to scratch their “hacking” itch.

Adware—or a piece of software that hijacks your browser to redirect you to a website hoping to sell you something—is a real annoyance, as it wastes the user’s valuable time and energy. It also isn’t unheard of for otherwise well-known and legitimate companies to use it in their own marketing, despite the risk they run of having to pay regulatory fines due to these behaviors.

While the real damage that adware spamming can do may seem minimal, it is also important to put the nature of these efforts into perspective. An adware spammer will use the same tactics that other serious threats—things like ransomware and the like—are often spread through. If you’re finding your workstations suddenly inundated with adware, you are likely vulnerable to a much wider variety of threats than you might first assume.

Some threats to your network aren’t even technically directed toward your business itself. Let me ask you this: would you see it as a threat to have your computing resources taken over and co-opted for another purpose? After all, the result is effectively the same as many more directly malicious attacks—greatly diminished productivity and efficiency.

This approach is quite literally how a botnet operates. Using specialised malware, huge numbers of otherwise unassociated machines can be taken under control and have their available resources directed toward some other means. A particularly famous example of a botnet’s power came just a few years ago, when a botnet was utilised to disrupt the services of Dyn, a DNS provider. This took popular websites like Twitter and Facebook down for several hours.

Missing or neglected patches are one of the simplest ways for a botnet to claim your resources as its own—particularly when login credentials haven’t been changed.

While political activism can be a noble cause, the hacktivist goes about supporting their cause in a distinctly ignoble way. Operating in sabotage, blackmail, and otherwise underhanded tactics, a hacktivist that targets your company could do some serious damage—despite the good that most of these groups are truly attempting to do.

Of course, the law also doesn’t differentiate between different cybercrimes based on motive, making this form of protest particularly risk-laden for all involved.

The recent cryptocurrency boom has seen a precipitous uprising in attacks that try to capitalise on the opportunity, using tactics that we have seen used for good and bad for many years now. Above, we discussed the concept of a botnet—where your computing resources were stolen to accomplish someone else’s goal. However, the practice of utilising borrowed network resources is nothing new. The NASA-affiliated SETI (Search for Extraterrestrial Intelligence) Institute once distributed a screen saver that borrowed from the CPU of the computers it was installed on to help with their calculations.

Nowadays, cybercriminals will do a similar thing, for the express purpose of exploiting the systems they infect to assist them in hashing more cryptocurrency for themselves. The intensive hardware and utility costs associated with mining cryptocurrency often prohibit people from undertaking it on their own—so enterprising hackers will use their malware to find an alternative means of generating ill-gotten funds.

Despite the dismissive view that many have towards video games and their legitimacy, it is important to remember that the industry is worth billions (yes, with a “B”) of dollars, massive investments into hardware and hours poured into playing these games. With stakes that high, it is little wonder that there are some hackers that specifically target this industry. These hackers will steal in-game currency from their fellow players or launch their own distributed denial of service attacks to stifle the competition.

The online gig economy has become well-established in recent years—where a quick online search can get you a professional to help you take care of your needs, whether that be for childcare or for car repairs or any other letter of the alphabet. Similar services exist for directed cybercrime efforts as well.

Using a combination of home-developed malware as well as examples that they’ve bought or stolen themselves, these professionals will license out their services for a fee. Whether it’s a governmental body seeking sensitive intel or a business seeking to undermine a competitor, these mercenaries can pose a significant threat against anyone who lands in their crosshairs.

On a related note, a lot of modern cybercrime is simply a digitised version of crimes we have seen in years past. Without another stagecoach to hold up, highway robbery has simply been shifted to the information superhighway, the stick-‘em-up translated to ransomware, dating scams, or denial-of-service attacks. The overarching motivation behind most of these efforts is simple: illegitimate fiscal gain.

Corporate spying is a decidedly more direct version of the pro-for-hire trend that we discussed above, where a hacker will target a business’ documents and resources to help their competition in any way they can. While there may not be honor among thieves, there can be amongst the businesses that these thieves will try to sell stolen data to, as some companies have reported the theft after being approached.

Finally, we come to perhaps the biggest threat out there to many: massive teams of professional, government-employed hackers working to undermine the operations and machinations of other nations—both in their governments and their industries. This is generally intended to put the other nation in a diminished position should hostilities ever erupt.

If you remember the 2014 satirical movie The Interview—and more pertinently, the hack that Sony Pictures suffered in retaliation for the film—you’re aware of a very recognisable example of this kind of threat actor.

Clearly, the idea of a hacker that so many have is far too minimalistic to be relied upon anymore… especially if you’re staking your company’s cybersecurity preparedness on it. That’s why eManaged is here to help. Our professionals are well-versed enough in best practices to help prepare you to deal with a much more realistic cyberattack. You just have to reach out to us at 1300 363 308 to get started.

More posts from author
Friday, May 07, 2021 Patch Management and How It Can Save Your Business
Wednesday, May 05, 2021 Tip of the Week: The ABCs of Windows Shortcuts
Monday, May 03, 2021 Companies Need to Keep Their Vendors’ Security In Mind

Patch Management and How It Can Save Your Business
Software runs our lives. It certainly runs your business. What if I told you that this essential cog in your business’ operations can also be the thing that is most susceptible to being exposed by outside attackers? It’s true, software can ...
Read More