Tip of the Week: How Bandwidth Works (and Why It Matters) 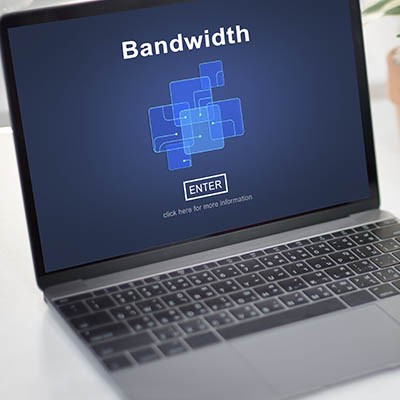 Businesses require a lot of their Internet connections, especially if they’re using technologies like VoIP, screen-sharing, and/or webinar platforms. If you’re looking to incorporate these features, you need to be sure you have enough bandwidth to support them. We’re looking at a few reasons that your bandwidth matters, and how to tell if you have enough for your needs.

Before we go any further, it is important that you have an idea of how bandwidth functions.

Bandwidth Does Not Equal Speed

This is a common enough misconception that can be cleared up with a relatively simple analogy.

Picture a fast food restaurant, with a school bus filled with hungry student athletes looking for a post-game meal. As this team is very coordinated, they all want the same things, allowing the crew member behind the register to take all of their orders at a consistent rate. While it may take longer, all of the team members will have their order taken.

Now, imagine that the fast food franchise has a second person at the registers, equally proficient as the first employee. While the speed at which orders can be taken hasn’t technically increased, more orders can be taken at once, so the student athletes will make it through the line faster.

This means that you can also invest in too much bandwidth. Let’s return to our fast food franchise for a moment. If you have someone ready and waiting on each of three registers, but only one customer, you are over-investing in your franchise’s “bandwidth.”

In other words, you’d be spending more money than you needed to, which is a pretty blatant (and shockingly common) problem for businesses.

The Influence of Bandwidth

The amount of bandwidth that your business has access to can have a considerable impact on your operations, by effectively limiting the amount of tasks that can be performed simultaneously - at least, without issue.

Different common business tasks will use different amounts of bandwidth, and most of them use a minimal amount of bandwidth. Then, there are the heavy hitters - Voice over Internet Protocol usage, webinars, and backup processes - that will use considerably more.

Fortunately, you can take steps to minimise the impact that insufficient bandwidth can have on your business’ operations. For example, you could throttle some of your less-important tasks, thereby saving more bandwidth for more critical ones, or simply scheduling as many of the processes that require a lot of bandwidth to take place after hours. Uploading a backup is a good example of this, as it requires a lot of bandwidth, so performing it after hours means that you won’t be interrupting other tasks.

Of course, one of the most helpful things to do that helps you optimise your available bandwidth is to find out how much bandwidth you actually have available.

When it comes to evaluating your bandwidth needs, there are a few different routes that you can take. There are speed tests available online that can give you an estimate of your bandwidth by comparing it to your approximate network traffic. One resource worth using is Speedtest.net.

However, if you are considering implementing VoIP or the other processes we mentioned above, there are other considerations you should look into, including:

We Can Help with a Network Evaluation!

eManaged has the skill to not only identify potential bandwidth issues, we can help you to resolve them as well! To learn more about what we can do to help your business function efficiently, give our team a call at 1300 363 308!

More posts from author
Friday, August 07, 2020 How Have Businesses and Their Technology Been Impacted by COVID-19?
Wednesday, August 05, 2020 What’s the Benefit of Content Filtering?
Monday, August 03, 2020 Google and Apple Pushed a COVID-19 Exposure Notification Setting to Your Phone. Here is Everything You Need to Know

How Have Businesses and Their Technology Been Impacted by COVID-19?
There is no question that the COVID-19 pandemic has had no small impact on the way that business is conducted. A considerable part of that impact is directed toward the technology that powers these businesses. One way or another, the way th...
Read More